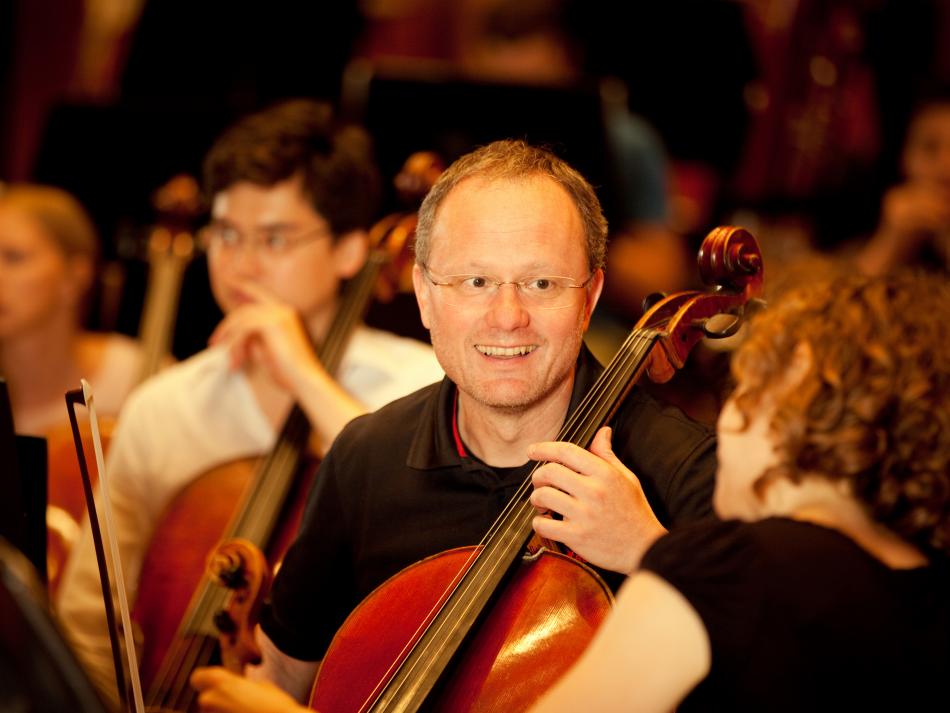 Born in Munich in 1961, Michael Hammermayer received his first cello instruction from the principal cellist of the Bayerische Staatsoper in Munich, Oswald Uhl, who remained an important mentor to him until his death in 1985. In 1979 he began his studies at the Hochschule für Musik und Theater München, graduating with distinction. At the Fondazione Accademia Chigiana in Italy he received further important encouragement from Paul Tortelier, William Pleeth and André Navarra. At this institution he obtained the diploma di merito.

At the age of 16, Michael Hammermayer won first prize in the Jugend musiziert competition.

He has been principal cello with the ORF Vienna Radio Symphony Orchestra since 2001. 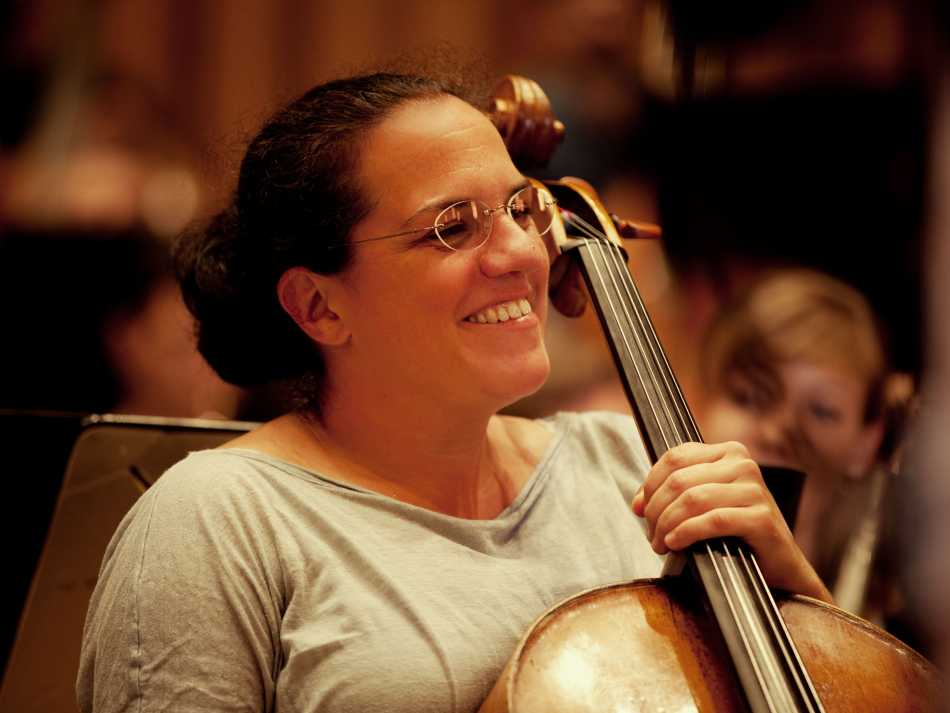 Julia Schreyvogel was born in Vienna in 1974.

She was only seven when she began her training as a cellist with Cecilie Ottensamer at the Music and Arts University of the City of Vienna. In 1995 she continued her studies at Berlin University of the Arts with Prof. Wolfgang Boettcher. She obtained her diploma in concert performance, passing with distinction, and in 1999 she also obtained her diploma from Berlin. Parallel to her university studies she attended master classes given by Boris Pergamenschikow, Janos Starker and Menahem Pressler. She also conducted artistic studies with members of the Alban Berg Quartett and the Haydn-Trio Wien.

Since 1996 Julia Schreyvogel has been a member of the piano trio trio VIENNarte that has already won several prizes in international competitions and has recorded CDs with works by Haydn, Brahms and Mendelssohn. In addition, she tours Europe, South America and Asia as a chamber musician with the Koehne Quartett, the ensemble Kontrapunkte, the ensemble “die reihe” and other chamber music ensembles. She has also appeared at festivals such as Wien Modern, Klangbogen Wien, Festival Bonheur Musical (France), Rheingau-Festival and the Festival Mecklenburg-Vorpommern. From 2001 to 2002 she was principal cello of Camerata Salzburg and from 2003 to 2004 she played with the Bamberger Symphoniker.

As a cellist she has won several prizes at the Jugend musiziert competition. In 1993 she was awarded the special prize of the Vienna Symphony Orchestra and in 1994 won the funding prize of the Carl Flesch Academy in Baden-Baden.

She has been assistant principal cello with the ORF Vienna Radio Symphony Orchestra since 2005. 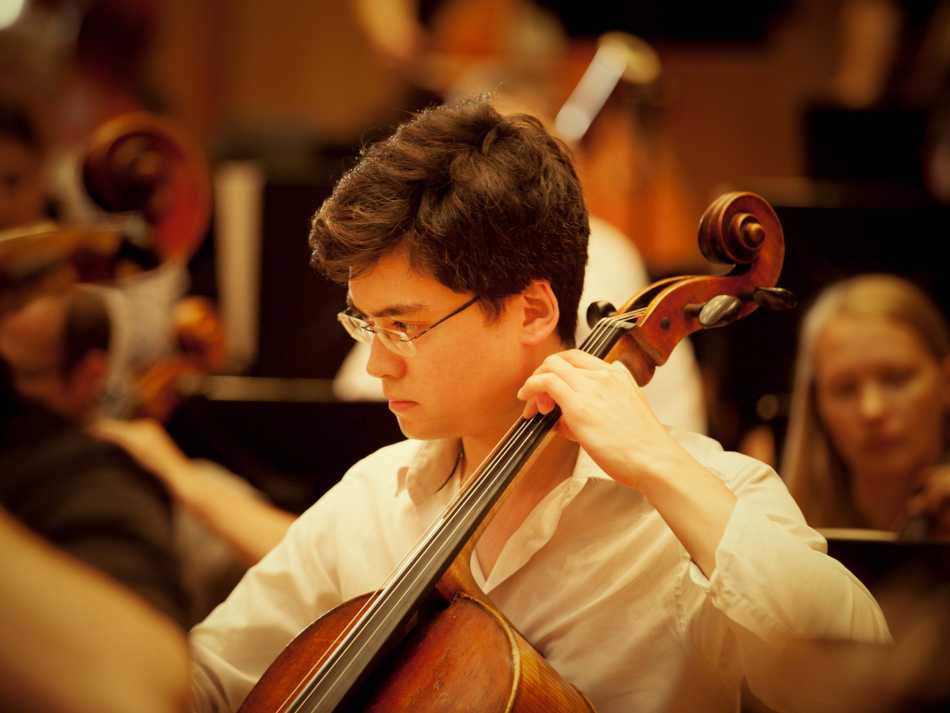 Raffael Dolezal was born in Tokyo in 1986.

He was only six when he began his training as a pianist with Prof. Helene Sedo-Stadler at the Music and Arts University of the City of Vienna. He received his first cello lessons from his father Friedrich Dolezal. In 2002 he switched to the University of Music and Performing Arts Vienna where he continued his studies under Prof. Wolfgang Herzer, Maria Sellner and Prof. Robert Nagy. Raffael Dolezal completed his training under Bernhard Naoki Hedenborg. He also devoted a great deal of time to chamber music and received instruction from members of the Artis Quartet among others.

He was able to gain experience of orchestral playing with the Vienna Philharmonic, the Tonkünstler Orchestra in Lower Austria and the academy of the Vienna RSO. In 2010 and 2011 he was a member of the stage orchestra of the Salzburg Festival and from 2009 to 2014 took part in the Angelika Prokopp summer academy staged by the Vienna Philharmonic. Concert tours with various chamber music ensembles have taken him across Austria, Europe and Japan. In 2015 Raffael Dolezal was a lecturer at the Pacific Music Festival in Japan.

Since 2016 he has been assistant principal cello with the Vienna RSO. 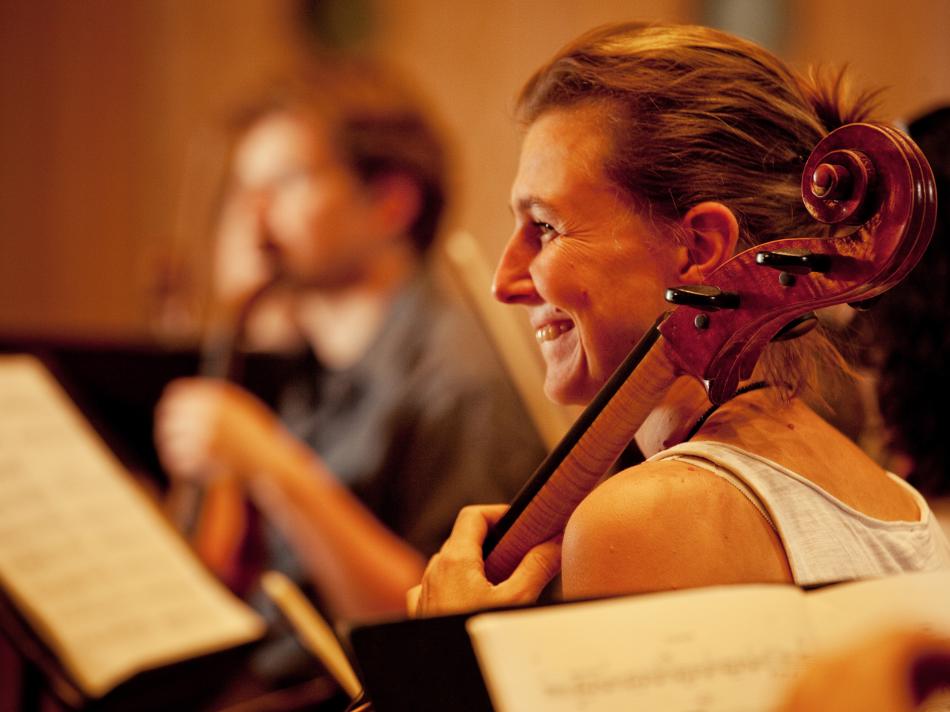 Solveig Nordmeyer was born in Upper Austria in 1971 and began taking cello lessons at the age of seven.

As a high school student she received cello instruction at the Anton Bruckner Private University Linz and the Mozarteum Salzburg with Wilfried Tachezi.
After passing her school-leaving exams at the music high school in Linz, she began studying cello at the University of Music and Performing Arts with Valentin Erben, graduating in 1995 with distinction.
She followed this with a postgraduate degree course at the Franz Liszt Music Academy in Budapest and numerous master classes with Yo-Yo Ma, Frans Helmerson, Emil Klein and David Geringas, among others.

From 1996 to 2000 she was principal cello with the Vienna Chamber Orchestra and since then has been very active as a chamber and ensemble musician (Ensemble Kontrapunkte, Ensemble Prisma).

In addition, she is a partner of the Johann Sebastian Bach Music School Vienna and teaches there and at various summer camps.

She has been assistant principal cello with the Vienna RSO since 2001. 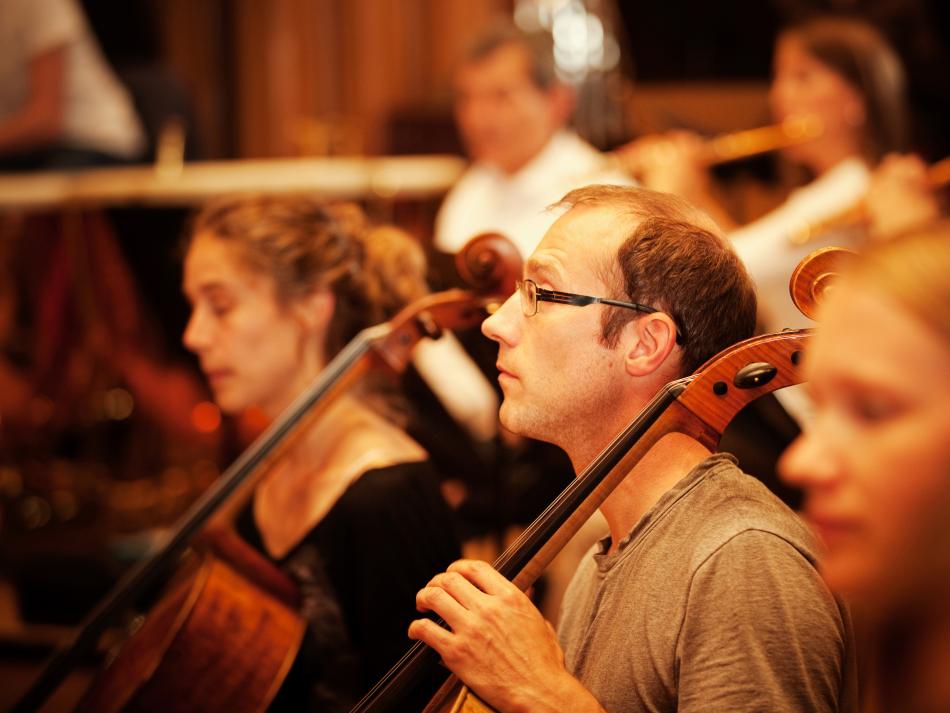 Johannes Kubitschek was born in Innsbruck in 1979.

He began playing the cello at the age of five and his teachers have included Klaus Haselwanter and Michael Tomasi. In 1996 he began studying with Clemens Hagen and Heidi Litschauer at the University Mozarteum Salzburg. In 2004 he passed his diploma examination with distinction. He then went on to do a postgraduate course with Tobias Stosiek at Graz University.

He was able to broaden his musical horizons and gain further experience in master classes given by Thomas and Patrick Demenga, Antonio Meneses and Wenn-Sinn Yang.

Johannes Kubitschek enjoys playing in small ensembles, and has already performed with several European and American groups such as the Wiener Jeunesse Orchester and the European Union Youth Orchestra. He was a substitute in the Tiroler Symphonieorchester and the Mozarteumorchester in Salzburg, and also helped out the Camerata Salzburg ensemble. Since 2003 he has been a member of the Mirabellquartett Salzburg and since 2010 has played for Trio Frizzante.

He was won several prizes at the Jugend musiziert and prima la musica competitions. In 1999 and again in 2008 he won third prize at the international cello competition in Liezen.

He has worked as a cellist for the ORF Vienna Radio Symphony Orchestra since 2008. 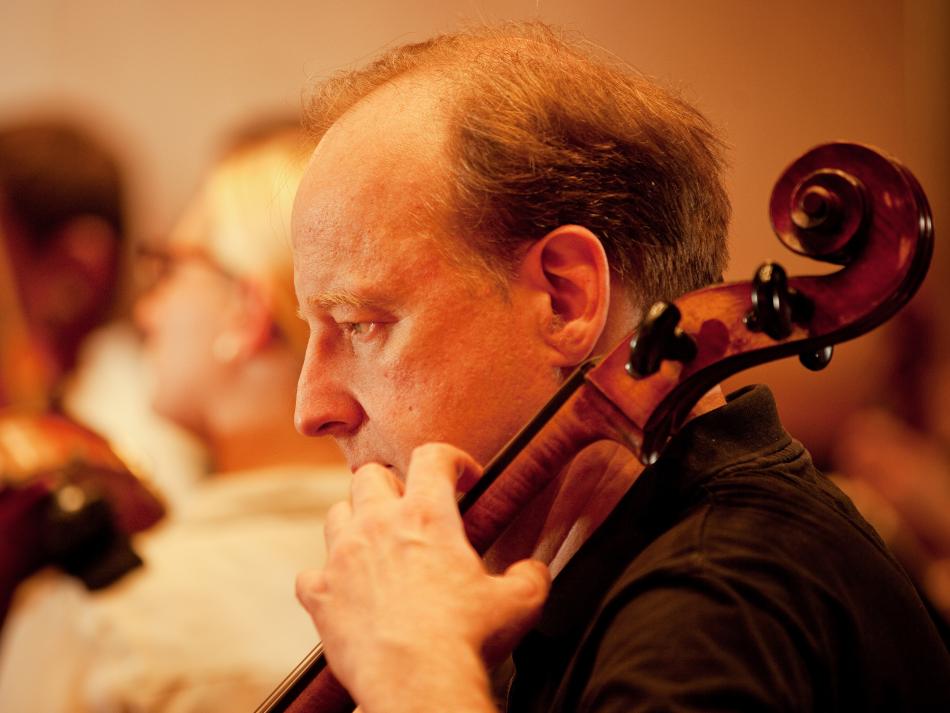 Till-Georg Schüssler was born in Stuttgart in 1962 and studied at the Musikhochschule in Köln and Vienna.

He was principal cello with the Vienna Chamber Orchestra from 1987 to 1994. Since 2001 he has been a member of the Rasumofsky-Quartett Wien.

Till-Georg Schüssler has been playing with the ORF Vienna Radio Symphony Orchestra since 1994. 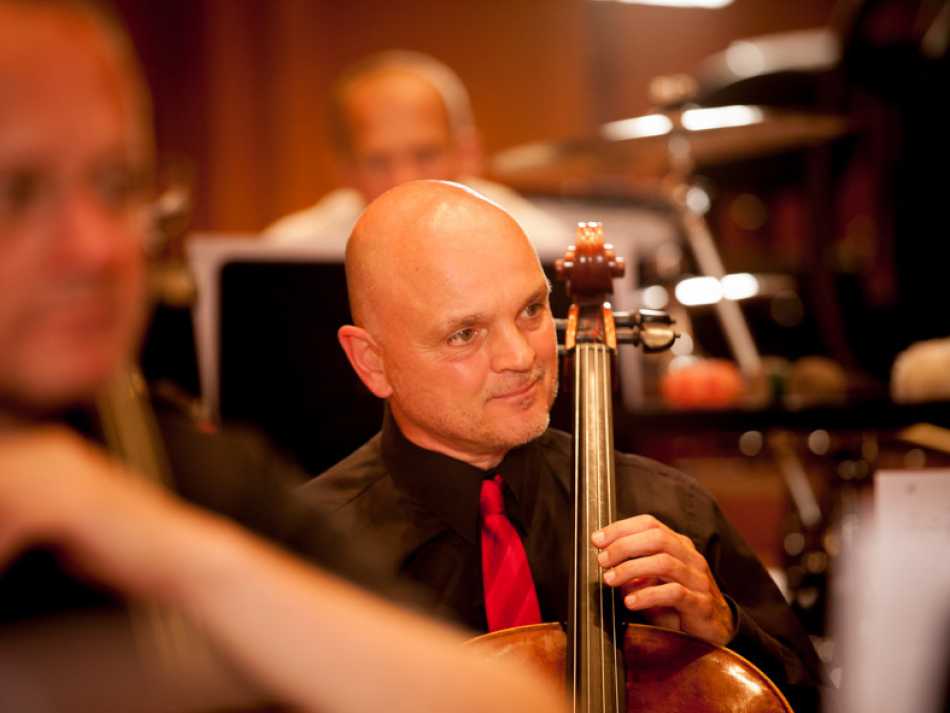 Peter Wolf has been a cellist with the ORF Vienna Radio Symphony Orchestra since 1982 and has also acted as its conductor on a tour of China as well as in several concerts in Austria and abroad. He has often taken on the task of assistant to the principal conductors Pinchas Steinberg and Dennis Russell Davies. In addition, he has worked as co-conductor at the Salzburg Festival and the festivals Steirischer Herbst and Wien Modern.

As a cellist he won second prize at the Concertino Praga international radio competition at the age of 15 and first prize in the Jugend musiziert competition in Leoben.
For ten years he played concerts with his brothers Reinhold, Markus and Thomas as the Wolf-Trio.

Born into a Viennese family of musicians, Peter Wolf initially completed a training course in cello with Heidi Litschauer at the Mozarteum Salzburg before studying conducting with Otmar Suitner at Vienna University of Music.

His conducting debut with the Vienna Chamber Orchestra at the Vienna Konzerthaus and the Linz Brucknerhaus was followed by the chamber opera production of The Marriage of Figaro in the Schlosstheater Schönbrunn in Vienna with Ildikó Raimondi and Wolfgang Bankl , and by gala opera concerts with Gabriele Lechner, Ilona Tokody and Georg Tichy.

In Johann Strauss year 1999 his CD recording of the composer’s waltz Tales from the Vienna Woods and the Tritsch -Tratsch-Polka with the
ORF Vienna Radio Symphony Orchestra was highly acclaimed as the official gift presented at all major events staged by the City of Vienna.

As guest conductor he has worked with the Orchestra of the Budapest Opera, prominent South American ensembles (including the Orquesta Filarmónica Nacional de Caracas), the Viennese ensemble for contemporary music “die reihe” and many others.

2005 to 2018 he was conductor and artistic director of the Jugendsinfonieorchester Wien – wJso and the Jugendkammerorchester of the Vienna conservatory, Camerata Con Brio. In the years prior to these appointments, educational work with young people in the youth orchestra of the “Jeunesse” music camp for children in the district of Graz-Umgebung had been an important part of his musical activities.

Radio and CD recordings as both a conductor and a cellist are ample evidence of this musician’s versatility.