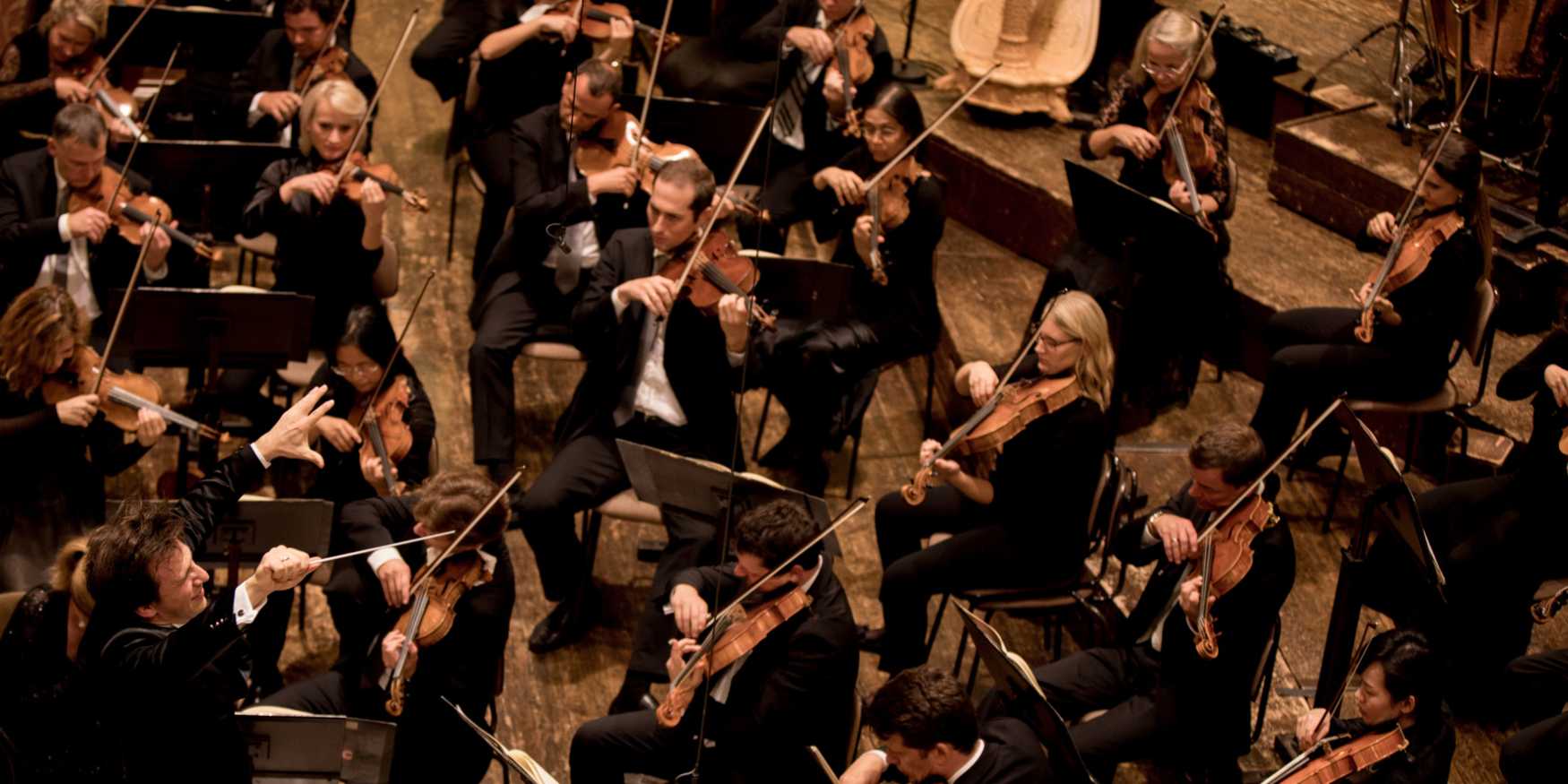 In 1945, the composer Max Schönherr founded an orchestra for the former RAVAG together with 50 musicians. He himself led the orchestra for 23 years.
In 1969, the RSO was formed from the “Grosses Orchestra des Österreichischen Rundfunks”, the orchestra of the Austrian broadcasting corporation.

On 19 September 1969 the “ORF Symphony Orchestra” was formed with members of the “Grosses Orchester des Österreichischen Rundfunks” and several musicians engaged in addition. The first principal conductor was Milan Horvat, who conducted the first concert in the Vienna Funkhaus (now RadioKulturhaus). This concert featured Gottfried von Einem’s “Philadelphia” Symphony, Mozart’s Piano Concerto KV 482 with Jörg Demus as the soloist, and Igor Stravinsky’s Petrushka.

That same year, the first concert trip took the orchestra to Ljubljana as part of the Graz Musikprotokoll festival.

In 1970, a second tour took in Bludenz, Vaduz, Innsbruck and Bozen. Following the success of the first season, it was decided in 1970/71 to enter into closer collaboration with the Vienna Musikverein, the Vienna Konzerthaus and the Musikalische Jugend, promoters of young musicians’ concerts.

After Milan Horvat had guided the orchestra successfully through its first years, Leif Segerstam from western Finland took over the post of principal conductor in 1975.

True to his origins, he introduced many musical influences from Scandinavia into the orchestra and championed the performance of Finnish composers such as Jean Sibelius. Under his direction, the concert cycles changed: “Cycle I” with eight concerts was held in the “Grosser Saal” of the Musikverein, “Cycle II”, also with eight concerts, took place in the Great Hall of the Konzerthaus, and the “Musica viva” cycle with its seven concerts was now given the number III and was also held in the Musikverein’s “Grosser Saal”.

In 1982, Lothar Zagrosek took over. He was very interested in continuous programming as was shown by the fact that, unlike his predecessor, he was available for 26 weeks a year instead of ten or twelve, which meant that he took responsibility for the orchestra beyond his work as its conductor.

The reforms he introduced included expanding the number of so-called junior contracts for strings which enabled the specific grooming of young musicians.

Another measure was the foundation of the ORF Sinfonietta, an ensemble with fluid membership and an extremely wide-ranging repertoire. This resulted in an enormous expansion of the audiences the orchestra was able to reach.

In the 1980s the orchestra was featured considerably more often on the radio. For the first time, there were radio programmes in which orchestra members had the opportunity to present their work themselves. From 1979 to 1985 the amount of broadcasting time allocated to programmes and productions featuring the ORF Symphony Orchestra increased by around 80%. Although the time given to music on television was limited, the orchestra was involved in a series of collaborative projects, also in the genre of popular music.

Collaboration with Leonard Bernstein: Performances of his opera A Quiet Place at the Vienna State Opera

Following the premature departure of Lothar Zagrosek there was a period of two years in which the ORF Symphony Orchestra had to cope without a principal conductor. Thanks to manager Dr. Helmut Riessberger, such prominent conductors as Elgar Howarth, Leif Segerstam, Miltiades Caridis, Heinz Wallberg, Zdenek Kosler, Charles Mackerras and Michael Gielen deputised.

The first task facing the new manageress, Andrea Seebohm, in 1998 was to look for a new principal conductor, and one was soon found in the person of Pinchas Steinberg.

Steinberg was extremely disciplined and meticulously prepared, and he demanded the same thoroughness from the musicians. His leadership left a lasting impression on the orchestra, whose average age also dropped during his tenure.

It was during this period that the ORF cycle in the Musikverein began.

The orchestra undertook two tours to Japan  (1990 and 1993) and one, with five concerts, to Spain which was followed by two invitations to Montpellier to the festival organised by Radio France. The CD recording of Wagner’s Flying Dutchman was a chart-topper in London in 1993 and received widespread acclaim. Besides Mahler, Stravinsky, Bartók, Berg and Webern, the orchestra also followed Russian, Czech, French and English musical paths under the direction of Pinchas Steinberg.

Under the artistic direction of Dennis Russell Davies many works by his compatriot Philip Glass were played. Glass is regarded as one of the foremost exponents of minimal music that emerged in the 1960s in the USA.

The orchestra is renamed the Vienna Radio Symphony Orchestra.

With Bertrand de Billy as principal conductor, the Vienna RSO grew to become one of Austria’s leading orchestras. With the orchestra, he worked hard to improve the tonal culture and chamber musicality.

Since 2007, the orchestra has performed film music at the annual film music gala “Hollywood in Vienna” in the Great Hall of the Vienna Konzerthaus. In the same year, Bertrand de Billy began expanding the orchestra’s tasks and establishing it as an opera orchestra at the Theater an der Wien.

After the ORF had for years, originally owing to the need for cutbacks, repeatedly cast doubt on the usefulness of the ORF Vienna Radio Symphony Orchestra, these potentially ruinous plans were stopped in 2008. This was achieved thanks to the efforts of principal conductor de Billy, public institutions such as the Kunstsenat and a petition opposing the dissolution of the orchestra signed by internationally renowned figures from the world of music.

From 2010 till 2018 Cornelius Meister has been principal conductor of the ORF Vienna Radio Symphony Orchestra. After expiry of his contract in 2018, he took on the post of general director of music of the State Opera in Stuttgart and the Stuttgart State Orchestra.

Under his tenure it has been possible to place the orchestra on an outstanding artistic and organisational footing and guarantee the orchestra’s future within the ORF. With programmes unique in the world, Cornelius Meister has given the Vienna RSO a more distinct identity and further raised its international profile

As the first woman in the history of the RSO Vienna, Marin Alsop takes over the position of Chief Conductor. Her first season begins in September 2019 on the orchestra's 50th anniversary.